So Microsoft has Announced release date of Windows 7, Beta build was out in market and now Even Windows 7 RC is available. You might have downloaded and tested it and you must be thinking it looks cool but don’t know what it has. Except for Internet Explorer 8, new Taskbar and few other fixes. You want to know What’s so cool about Windows 7, and what coolest feature it has which will remove the need of few Third party software. So it’s not only Memory efficient by itself, it eliminates need of several third party tools which will save Money and Resources for your Desktop.

We bring few of them out here, will present more in future. But Tell me how would you like if you can defrag multiple drives together, or You can burn ISO right into Windows itself, and using Virtual Hard drives or even booting from them… Won’t you like the system more than ever… If yes Then you gonna like Windows 7 very much…

This feature is top in out list as many Windows Vista users were annoyed from UAC, and way this small utility secure your PC. This is because it shows warning messages every now and then for every single action which is against it’s security policy. Vista Users have no choice but either disable it or  use with annoying prompts.

But Windows 7 improves this by adding a control to User Account control. Now you can set levels for warnings it display and when to display. This will be less irritating now or even it will ask your permission only if System is changed in a way which can be harmful. I am simply loving UAC now hope you also will feel like same.

This feature is something for which every Windows user was waiting for long. While Microsoft himself distributing beta images as ISO files but there was no way Windows can read the ISO files.  but now They have included this feature in Windows 7 .  No You can burn ISO images to CD or DVD by double-clicking the ISO image, choose your DVD writer, click ‘Burn’. 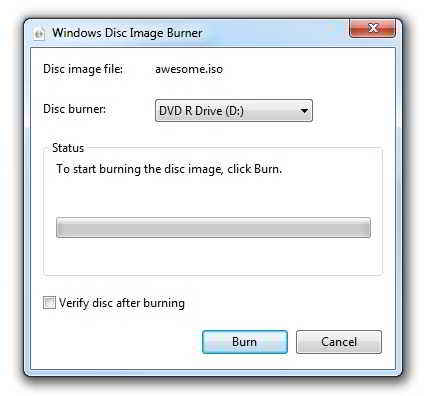 With the addition of this feature I guess Microsoft is going to distribute its packages as ISO images in future.

If you running multiple OS on one PC then you must have heard of Microsoft’s Virtual PC. It stores the drives for its virtual machines in .VHD format. Now windows7 has in built support for accessing Virtual Hard disk files created by Virtual PC. You can mount these virtual hard drives without using Virtual PC. Just launch ‘diskmgmt.msc’ and click Action >  Attach VHD.

Windows 7 also has the ability to create Virtual Hard disks and mount them as an individual drive. Once mounted you can store data install program and do whatever you want as you working on a Hard disk. Need to Move on ? just detach the Hard disk and copy it in your Mobile drive and attach it to somewhere else on some other computer…

If you have Windows7 ultimate you can even boot form your Virtual Hard disk… this enables us to istall any other operating system without changing configuration of your Current os and Hard disk… all you need is enough free disk space to store your VHD files.

Microsoft finally decided to improve his own favourite utilities Microsoft Paint and Wordpad. New improved version will be available in Windows7.  Wordpad now has support for reading and writing document in Office 2007 format. So if you are a office users and you use only Word and no other application form office suite I guess you will not need to install or Buy expensive Microsoft office. This single feature can uplift sale of Windows 7 above its predecessors.

Paint also has new features like ‘oil’, ‘crayon’ and ‘pencil’ brushes . Both paint and Wordpad now use an Office 2007-style interface and toolbar. another one of the best addition is  Windows Calculator. it now have some powerful Statistics and Programmer modes, while for simple users there are few new options added in standard mode.  This  will now become a good tool for unit conversions (length, weight, volume and so on), date calculations and templates to help you calculate several other things liek mortgage rates, vehicle mileage and other tricky things.

Good news for multiple Display users, if you are annoyed by the fact that every time you need to change desktop between your display devices you have to go into Display Properties, this feature is for you. Now you can switch desktop by just a single keyboard shortcut. Simply press Windows+P and  it will show you list of available displays, select one you need and you are done…. I guess Windows 7 is adding a lot of simplicity to our daily life for advanced users…

This is second best Image related feature in Windows 7. You can;t see your images in Windows right.  before setting your images have a look at your monitors setting and setting of your display card. It might be possible that your image is correctly formatted but because of these settings you can’t see them right.  To prevent all these mishaps Windows 7 has an in built screen calibrating wizard. It’s easy to follow and in  few steps you will have your color settings configured correctly.

Well this seems to be for Microsoft itself but will definitely help number of novice users who don’t know much about windows or PC. this toll will help you in recording your interaction with an application which can be later used to playback and show what all steps you performed. This is a very handy tool to troubleshoot a problem.

This is why I called it for Microsoft itself, it seems they had a tough time in understanding users work flow on their own Windows. Now a user has to just launch the problem steps recorder tool, click record and perform the steps which are creating problems. Every single activity by user on Windows will be recorder and will be zipped with screen captures which you can mail either to Help or support or your friends.. this will help a lot and will save many hours of technical helpdesk people.

I hope you enjoy reading this, if yes let us know what you would like to read more by sending your comments. Thanks!

Where Do I Go To Get Help With Windows